Four construction workers were rescued from collapsed scaffolding under an Interstate 95 bridge in Fort Lauderdale on Monday and taken to Broward Health Medical Center.

Their conditions were unknown late Monday, according to the Fort Lauderdale Fire rescue Division.

One construction worker was buried under the collapsed scaffolding and three others were left dangling in the air for about two hours. 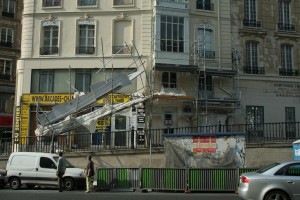 Four construction workers were rescued from collapsed scaffolding under an Interstate 95 bridge in Fort Lauderdale on Monday.

The men were part of a crew working under the southbound lanes that extend over the New River between State Road 84 and Davie Boulevard. The collapse was reported on Monday around 3:30 p.m. near the 2000 block of Southwest 21st Avenue.

It took the firefighters a bit more time to rescue the workers due to unforeseen circumstances.

As the Tri-Rail train travelled by on the train bridge, it would cause vibrations. Even the cars driving by caused the scaffolding to shake.

Eventually, the one worker was extricated from the rubble of the scaffolding. Another two workers were brought down with an extended bucket truck.

The location of the fourth victim over the water required a Technical Rescue Team to get involved. A firefighter was lowered on a harness and attached himself to the dangling worker. They both made it to the ground by 5:15 p.m.

Scaffolding is a platform or other type of structure that is temporarily used to help build, install or repair an area that cannot be reached by a ladder or another tool. According to the Occupational Safety and Health Administration, there are approximately 4,500 scaffolding accidents every year.

Scaffolding accidents can occur in a variety of situations, but most of these accidents involve the following:

The height in scaffolding accidents can result in very serious or even fatal injuries. Injuries often include broken bones, severe fractures, head injuries, spinal cord trauma, paralysis and death. On top of the physical harm suffered in scaffolding accidents, victims and their families are usually left to deal with a great amount of financial and emotional stress. Medical bills, lost wages and disability are all cost factors that could be an issue following such a serious accident.

Scaffolding accidents can take an enormous toll on the daily lives of victims and their loved ones. A South Florida Injury Attorney at Whittel & Melton can help you through this difficult time and answer any legal questions you may have pertaining to a scaffolding accident lawsuit, including possible worker’s compensation claims. For a free initial consultation, please call us today at 561-367-8777 or dial us statewide and toll-free at 866-608-5529. You can even fill out an online evaluation form by downloading our free app from the Apple App Store or get it on Google Play.